Original is a 19 " cold bronze image of a dancer captured in flight and suspended above a 5" include cube of black marble.

The sheer beauty and energy of a well-defined and disciplined body in movement, especially in dance, is an important theme for George.

It captures the joy and magic in movement.

Available in Bronze, one of a special limited edition of 20

Signed & Numbered Limited Editions on Base. 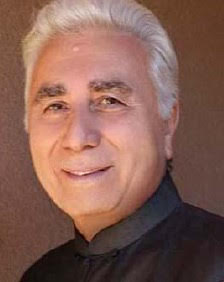 As a sculptor, George Cappannelli celebrates his search for harmony and greater awareness and the Great Mystery that is life.

Choosing to avoid the use of machines and mass production techniques favored by some of his contemporaries, he has undertaken a journey to rediscover the purity and honesty of art carved and modeled by hand. As a result, his art represents his own search for meaning discovered within rather than imposed upon the stone and wood he carves and the clays, waxes and plasters he models. Neither form without feeling nor intellectual conceits detached from the human experience will be found in his work. Instead one can discern strongly expressed and intimately experienced images that emerge from his love for the journey as well as for the media he explores.

His work is included in a number of private and public collections and has been recognized with a number of prizes, awards and grants. He studied with Jose DeCreeft, Sidney Simon and Gustav Rehberger at the Art Students League in New York. He has also executed a number of private and public commissions. George is also an award-winning writer and producer/director. His work has received 9 national book awards including a Gold Nautilus and film and television work has received International Film & Television Awards, Two Special Category Emmy Awards and most recently, a 2020 Telly Award.